Since its founding in Osaka City in 1985, Sakae Shikosho has been developing its business mainly in the post-processing of high-quality packaging and cosmetic packaging, using high technology and three flatbed punching machines with a small number of elite workers specialized in the die cutting of packaging. 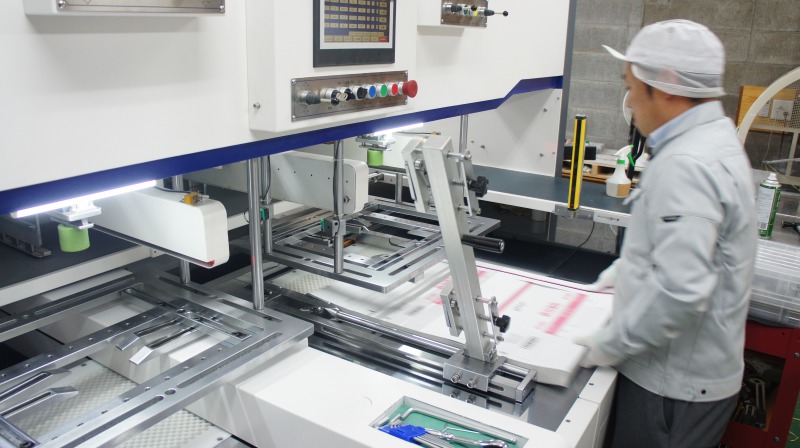 What made you decide to introduce NS-Crease Line and MBM?

At our company, we were considering efforts to improve efficiency and save labor for the two operations that are the major bottlenecks. The first is face-cutting work during punching, which used to be manual work, but it took a lot of time to remove unevenness. We handle many cosmetic packages, but most of them require very strict quality. Depending on the company, defective ruled lines are visually inspected one by one.

Therefore, no compromise was allowed, and adjustment work by skilled workers was essential. One thing is to make this work a manual so that anyone can do it. The second is labor saving in Musiri work. As with any paper company, simple manual force work is a very demanding task. It was common practice to put off the work and deal with the accumulated musiri work overtime.
I want to thoroughly rationalize and reduce costs here because it is a job that can not be taken as wages due to old customs. The second initiative is to improve this.

What was the deciding factor in choosing the Crease Line and MBM?

Our goal was to improve the above issues at the same time. I thought that improving just one or the other would not speed up production as a whole.

What are your thoughts on the introduction of NS-Crease Line? 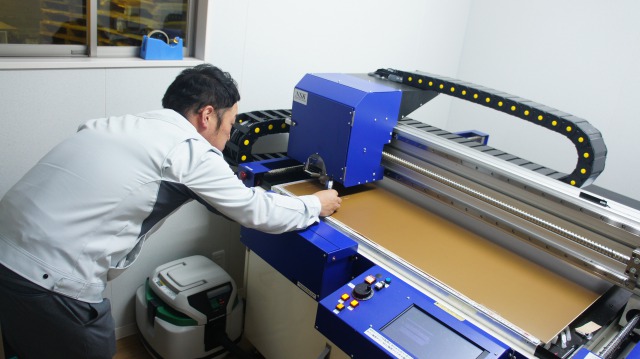 Check the depth of the ruled line groove using the depth gauge.
The machining accuracy of 0.01 mm level can be maintained stably.

At our company, we were considering efforts to improve efficiency and save labor for our two major operation bottlenecks. The first is counter-plate production for blanking, which we did manually before, and it took a lot of time to remove unevenness. We handle many cosmetic packages, and most of them require very strict levels of quality. Depending on the company, ruled lines are inspected visually, one piece at a time. Therefore, no compromise was allowed, and adjustment work by skilled workers was essential. We wanted a solution so that anyone could do this work.

What effect has the Crease Line 8-ATC had on your business? 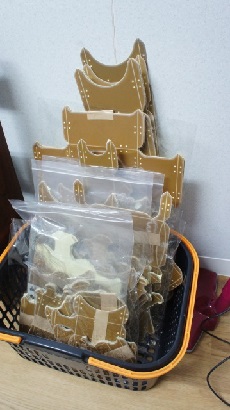 The mechanization and automation of counter
plate processing makes it possible to prepare
plates ahead of the Thomson machine.

First, by introducing the Crease Line, the quality of ruled lines has improved dramatically. The uneven removal work, which took more than an hour to set up, can now be finished in 20 minutes. Most importantly, anyone could now systematically make plates of the same quality.

At our company, work setup was decided about a month in advance, but now we can make plate according to the production schedule. Nowadays I leave production to the part-timers, and I can complete plate manufacture a week in advance by just having them work 10AM to 3PM for two days.

With the extra time made from using the machine, we are now able to take on the challenge of creating plates with more complicated shapes we couldn't make before, and nowadays the number of plate production jobs we receive is now increasing.

What are your thoughts on the introduction of the Multi Blanking Machine (MBM)?

Unlike the NS-Crease Line, the MBM operates independently, so the start-up was smoother. Many of our customers have relatively small-size packaging jobs with multiple impositions, and few extrusion pins are needed, so job change setup can be done in a very short time. The largest project size is around 2000 shots, and on average we handle 10 to 12 projects a day, but thanks to the MBM we are able to handle this without going into overtime.

In addition, the operation style is good because it allows you to work while checking the blanked stacks one by one on the spot.

After the introduction of the MBM, the number of people who came to see the machine increased, but I often asked, 'are there any marks or signs of damage on the back side?' At the time, I would actually pull out the pieces, check with my own eyes, and ask visitors to confirm that there were no marks and no damage. I can assure you that, as long as the punching quality, the paper alignment, and pin insertion are properly maintained, that pieces will not be scratched or damaged.

What effect has the MBM had on your business?

The MBM was running from day one because there was a lot of blanking work waiting at that time. Partly because of that backlog, the startup was very smooth, and the effect immediately showed tangible results.

The main volume was around 2000 per job as I mentioned, but in terms of larger projects, we were able to blank 25,000-piece jobs between 9AM and 3PM. Only one Thomson machine and one MBM operator were needed. In fact, when blanking by hand, the same job took up to ten people. Now it is all done by one person.

In the past, it was possible to attach three people to blanking and process them in the same time, so I realized how large the labor-saving effect was. 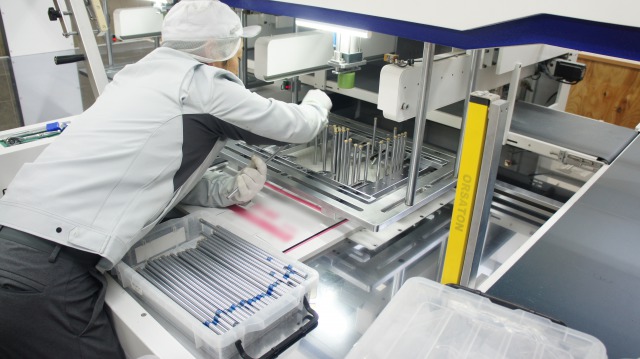 The effect on quality is clear also: Paper dust cleanup has been reduced. Many cosmetics packages have a surface coating, and when you punch these out, paper dust remains along with stray pieces of the film, and these needed to be removed.

When processing with the MBM, these stray pieces stay with the waste paper, and the product will be removed cleanly. I wanted to reduce the number of times touching the product as much as possible to prevent dirt and scratches, so reducing the cleaning work was an unexpected yet welcome additional effect of using the MBM.

By reducing the burden of blanking work, it has become easier to sell even simple blanking projects that were previously taken reluctantly due to the heavy labor involved. In particular, projects such as mountings do not need to be as quality-sensitive as cosmetic packaging, so they are easy and ideal for MBM.

Our figures show that the introduction of the NS-Crease Line and the MBM has been very effective in addressing the project management issues that were raised.

What is your outlook on the future of your business?

I believe we have successfully cleared the issues we were aiming to resolve. We will work as much as possible without compromising our stance on emphasizing quality, while eliminating work that can only be done by specific individuals. We aim to create a well-balanced workplace where we can work when we should and rest when necessary. 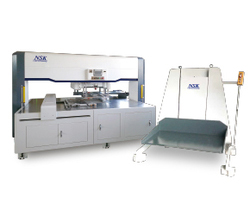 More Info The MBM is a short-run production type blanking machine for punching of projects such as packages, cards, mounts, and labels. The twin-head type is ideal for layouts including nesting and impositions. The pin-type design means no need for creating a blanking die, and the machine can flexibly handle a wide variety of blanking shapes. 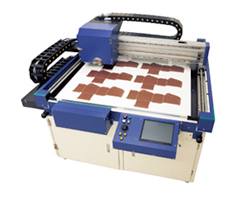 More Info A dedicated machine for processing die face plates. The 8ATC includes a built-in automatic tool changer. An inspection camera is also installed to maintain the quality of wooden die board manufacturing.